I break the law 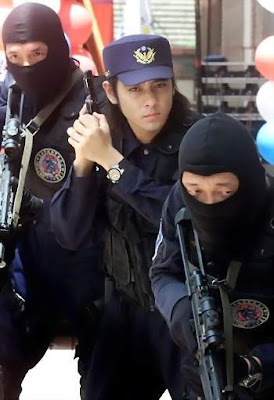 On Friday, three other scooter riders and I simultaneously got pulled over by the Taiwanese police.

Other than the occasional late-night drunk driving check, I'd never been stopped before. 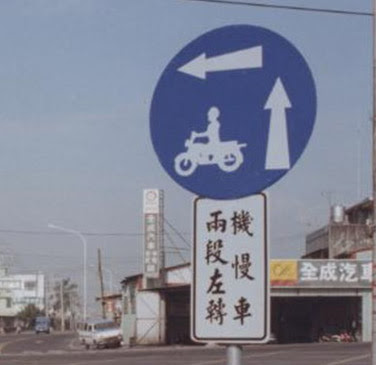 Our crime? All of us had turned left at an intersection. We had the green light, and the oncoming traffic still had a red light.


However, none of us complied with the "two-point turn" sign that you see on the right.


機慢車 (jī màn chē)—Scooters & slow-moving vehicles
兩段左轉 (liǎng duàn zuǒ zhuǎn)—Two-part left turn
When you see this sign, instead of turning left at an intersection, you must first drive to a painted box in the lane perpendicular to yours (the cross-traffic lane), and wait there until the light turns green. Theoretically, this reduces the risk of a head-on collision from opposing traffic. 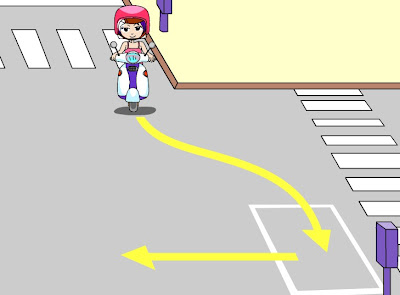 Here's a graphic to help explain.

In this picture, however, the scooter rider is driving on the left. In Taiwan, like in the US, we drive on the right side.

The fact that I got this explanatory image from a Taiwanese website, explaining traffic rules to a Taiwanese girls' school (http://www.cygsh.cy.edu.tw/) may help explain my frustration with the overall driving sense here.


Let me whine here a bit. I've been driving this same route to work for more than two years now, and I'd never seen that sign before. This particular intersection has been experiencing construction work for the past few months, and I had noticed new lines recently painted on the upgraded asphalt, but not the sign.

Anyway, the two cops motioned the lot of us towards the side of the road.

While one guy took care of the three Taiwanese offenders, the other cop—who obviously drew the short straw—approached me. In his best English, he asked for my identification. He took my license and asked, "Can you speak Chinese?"

I'd heard plenty of police stories, from foreigners and Taiwanese alike, advising to always play dumb. In my case, I really wasn't deceiving anyone when I answered 一點點 —"A little bit." 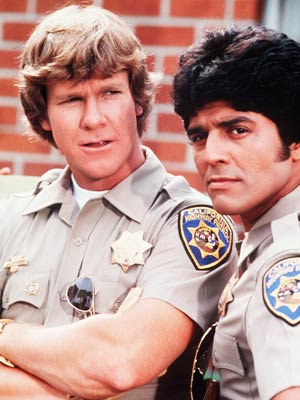 The officer went back to consult with the other officer, while I still didn't understand why we had been stopped. A bit later he returned and, showing me some images from his digital camera, he explained that we hadn't followed the two-point turn sign. After seeing the evidence, I accepted the fact that I was indeed in the wrong.
The officer then remarked that my license was expired. I pointed out, however, that I had renewed it, and that the DMV had simply written in a new expiration date on the back, which the officer hadn't noticed. He asked if I owned the scooter, whereby I produced my vehicle owner's registration and proof of insurance. I know that plenty of foreigners drive illegally here, so I think having the proper paperwork helped my case.
The officer informed me that I could pay the ticket at the Post Office or at 7-11 (of course!) and told me in English that the fine would be NT$6,000 (US$180). Incredulously, I asked 六千塊嗎?! —"Six thousand dollars?!" at which point he realized his error and, flustered, tried to remember the correct English. I suggested 六白呢? —"Six hundred?" (US$18) which he verified as the correct amount.
He continued to write the citation, but kept his eye on the last scooter rider who was pulling away. He watched her go down the road, and when she was out of eye shot he quickly returned my documents and told me no ticket was necessary! Knowing I was indeed guilty, I asked 真的嗎? —"Really?"  He simply advised me to be careful in the future, and I assured him that I would obey the sign now that I knew it existed. 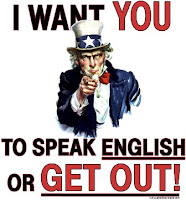 One cultural difference I've noticed between Taiwan and the US is language tolerance. Although Mandarin Chinese is the official language here, people will seem embarrassed when they feel their English isn't up to par, especially government officials and those with higher education. I've never sensed a superior and dismissive "You're in Taiwan—speak Chinese!" attitude, although I suppose that's their right.
Of course, when spending an extended length of time in a foreign country, you should try to learn the local language. However, anyone who has attempted this knows that it doesn't happen overnight. And during that transition, a little understanding and helpful sympathy from the local population goes a long way towards social harmony. The Taiwanese understand this and put this into practice.
UPDATE: I'm not saying I'm a saint. This past weekend I rented and drove a 125cc scooter, although my license indicates that I'm only legally authorized to drive a 50cc.