Wow, I haven't posted to this blog in three and a half years.  Will I ever come back and update my life in Taiwan, and in general? Not that anyone cares, but it might be nice for posterity, something for my kids or grandkids to read someday.

On Thursday, February 4, I began my Chinese New Year's vacation trip. My destination was Morocco, with a two-day stop in Liechtenstein on the way back.

For several months since I had booked the tickets, I was excitedly anticipating my first time in Africa!

I arrived in Zurich, Switzerland early Friday morning, where I had about six hours until my next flight to Marrakesh.

I spent the time looking for a geocache near the airport. At first I spent about an hour looking in the wrong place—outside in the cold winter drizzle along some train tracks. I finally realized that I should have been looking in a nearby parking structure. Although I had to climb ten flights of stairs, it was worth it to get out of the rain and find a cache full of trackables!

The next leg of my journey took me from Zurich To Marrakesh. Although I ended up with an entire row of seats to myself, I was too excited to lie down and sleep. Morocco awaited! 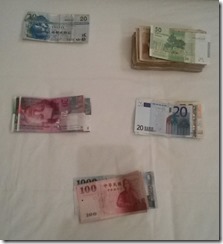 I was so tired from all the plane rides that by the time I arrived in Marrakech I was dead tired. But finally being here gave me a second wind. The first order of business was exchanging money. By this time I ended up with five different currencies in my wallet: Taiwanese and Hong Kong dollars, Euros, Swiss francs, and now Moroccan dirhams.

I needed to get a SIM card. For geocaching. Priorities, you know. I was directed to a shop in the airport where two young Moroccan guys were helping a middle-aged woman. They were speaking French so I could kind of understand the gist of their conversation.

I watched the scene, fascinated. The young guys shamelessly flirted with the woman, who could have been their mother’s age. The woman seemed to enjoy their flirtatious comments and gestures, and played along with the game. I couldn’t imagine this taking place in the U.S. in this kind of professional business setting, especially with the level of innuendo that the salesguys were using. Yet, they completed the transaction without incident; the woman didn’t seem uncomfortable in the least. It was a very interesting salesperson-customer exchange and I was curious if this would be typical here.

The driver from my riad (a Moroccan B&B) met me at the airport. He was a sweet older guy who explained the sights along the drive. We drove through the “Pink Palace” and I learned a little about King Mohammed IV.

As we entered the medina (walled city) I remembered the warnings I had read online about the labyrinth of streets. I thought, “These streets won’t be so hard to navigate.”

Then reality hit as we parked and I followed my driver through twisty lanes to the riad. I would never have been able to find this place on my own, and this wasn’t even in the heart of the medina.

The old plaster walls and tight spaces in the lanes of the medina do not give any indication as to the space and beauty found within the riads! I was pleasantly surprised by the North African ambiance—and especially the hospitality of the hosts Ahmed and Mustafa—as I entered Riad la Porte Rouge.

I was greeted with Moroccan sweet mint tea, cookies, and a warm introduction to the riad and the activities that awaited me in Marrakesh. Truly first-class customer service here!

Ahmed helped me arrange a daytrip to the Ouzoud Waterfalls for the next day, as well as a relaxing hamam scrub and massage afterwards. I ate a traditional Moroccan dinner at the riad, deliciously prepared by Mustafa.

Since Thursday evening Taiwan time, I had spent many hours traveling through three continents. I was exhaused and thrilled. Tomorrow at 8:00am I would be heading to the High Atlas Mountains so it was time to finally get some real sleep (not airplane “sleep”) in a comfy bed.

Posted by Steve at 7:49 AM Labels: Marrakesh, Morocco, travel No comments: