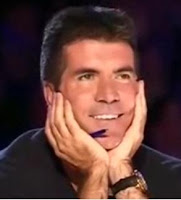 I must thank my friend Michael K. for sending me this video from Britain's Got Talent, the UK version of American Idol. It features contestant Susan Boyle, a never-married, "frumpy" middle-aged Scotswoman whose voice prompted this awe-filled smile from Simon.

It also brought tears to my eyes.
Susan Boyle Sings on Britain's Got Talent 2009 Episode 1 @ Yahoo! Video
The longer version, with more comments, can be found here: http://www.youtube.com/watch?v=9lp0IWv8QZY

♬ Do Re Mi


I found this video today and have plastered it everywhere--on MySpace, on Facebook, and now on my blog.

Sadly, today's news is overflowing with reports of the cruelty that humans inflict upon each other. Happily, though, the situation for our species is not hopeless, and this video demonstrates the joyful human spirit.

It put a silly smile on my face, and I hope it does the same for you.

Posted by Steve at 4:49 PM Labels: fun, music No comments:

The king of fruits 榴蓮 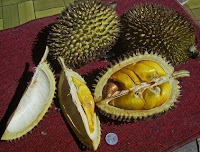 This is durian (榴蓮), also known as the "King of Fruits," and I tried eating it for the first time this week. Unfortunately, this monarch's reputation stinks. Literally.

In fact, reading the various descriptions of the durian's unique scent and taste is almost as fun as watching someone try it for the first time:

Admittedly, I was apprehensive about tasting durian after reading the above. However, I'd read similar reports about stinky tofu (臭豆腐) and now I love it. So when some Taiwanese friends recently offered durian during dessert, I accepted the challenge. 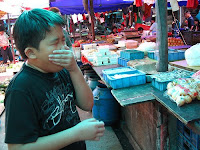 The portion I tried had been refrigerated, so the smell--like a slightly dirty diaper?--wasn't too strong. The cool, smooth texture reminded me a lot of the custard-apple (釋迦)—which has a very sweet taste—so I guess my brain was expecting the same. As the fruit warmed in my mouth, however, I realized that my assumptions were way off. To me it tasted like I had mouth full of rotting onions.

Honestly, though, it wasn't the worst  thing I'd ever tasted. I was able to swallow it (unlike exotic food guru Andrew Zimmern), and I may even try it again. With it's oniony flavor, I imagine that durian could be tasty when combined with meats or vegetables. Yet, this fruit is usually eaten alone, or as a kind of dessert, which truly boggles my mind.

The hospital, the library, and a visit home

I've decided not to begin this entry with a long-winded explanation of why I haven't posted anything in nearly a month. Let's just call it laziness, and move on.

Medical care is so much cheaper here than in the US. Here's a breakdown of my hospital stay expenses which, under the National Health Insurance, are 10% of the actual cost: 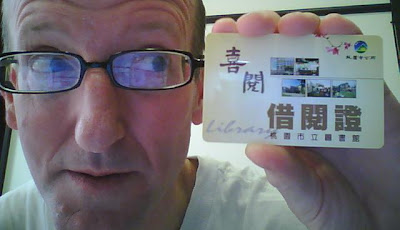 In other news, yesterday I went and got a library card. I was proud of this accomplishment because the staff spoke no English, so I was completely on my own. At one point, the woman assisting me stared at my ARC with a puzzled look, struggling to determine which parts of my ridiculously long hyphenated name to enter into the computer. When I informed her that I had a Chinese name, she was visibly relieved and quickly typed in the three characters (as opposed to the 16 keystrokes needed for my English last name). Little experiences like these make me feel like I'm actually integrating into Taiwanese life.

That's not to say that I'm fluent in Chinese. Far from it. I rarely am able to put even two sentences together. I admit it's my own fault; I just don't study, despite my new year's resolution to the contrary. Every week I tell myself that I'm going to buckle down, but as of yet I have no regular study schedule. And no, you can't just "pick up" the language without studying. Sure, you can learn a few words and common phrases without trying, but I maintain that one cannot become "conversational" without traditional study and memorization (unless you're a small child).

GOOD NEWS: I'm making definite plans to visit the US during next year's Chinese New Year, which will be in mid-February, 2010. I'm going to ask for enough extra days off so that I can come for at least two weeks. I've never asked for time off my job, so I should have no problem getting the time off, especially if I ask early enough. To help my plans, I'm going to be moving to a smaller and cheaper place (one-room) in the summer when my lease expires. I'll give more details about the trip, and my new address, as soon as I know them.

Posted by Steve at 10:07 AM Labels: culture, news, travel No comments: